Forum dedicated to the buying and selling of quality heritage poultry in Western Canada.

You are not connected. Please login or register

Posts : 762
Join date : 2011-07-28
Location : Cowichan Valley, BC
Awhile back there was a discussion on cast iron cookware, and I think a few questions on seasoning.
Almost all cast iron can be saved, and brought back to near new condition in a few steps.
I have been hunting for a large skillet, like my dads, that I grew up with, but frankly, too cheap to pay some ridiculous amount for a new one. So, wifey (very soon) found an old one in the thrift store, sent me pics while I was at work, and I said grab it. For $35.

The first thing you need to do is get rid of the old, probably mistreated seasoning. Seasonings can be done wrong, or go bad with neglect. Too cool of a temp while seasoning, and it can just rub off.

If you have a self clean oven, this is the easiest. Throw the pan in the oven during the cleaning cycle. Just like that, its back to its basic, iron looking pan. It may need a bit of light scraping to remove any flakes, but it's back to normal again.

Now its just like seasoning a new pan.
I use Crisco lard. Mostly because it has a high boiling temp. Some people dont realize that all oils are different, and have lower boiling temps than others. Olive oil is the worst. It will burn at anything over medium heat if left long enough, and ruin a good pan. Well, not ruin, because you just repeat step one!

Anyway, coat the entire pan in lard, handle, bottom, the works. Put something in the bottom of your oven to catch the drips.
I preheat the oven to about 450. I find it works well.
Put the pan in upside down on a rack, and leave it in there for an hour minimum.
Once again, Ill say too cool of a temp is no good.
And yes, your house is gonna stink for a bit as the lard cooks itself onto the pan.
After an hour, let it cool, and repeat the process again.
Twice is usually good enough, but sometimes a third might be necessary.

After youve done this, and before you put it away, give it a light rub with more lard, or oil. Something to keep any moisture from setting in.

Now to keep it well seasoned is the trick.
After every use, a tablespoon or so of good oil or lard in the pan, and put it on the stove top at about medium heat until it JUST starts to smoke. Turn it off and give it a quick wipe and let it cool.

This should be done AFTER EVERY WASHING!

Your pan will get nothing but better. If you find it not working well, start all over. 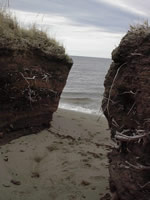 Posts : 498
Join date : 2012-05-08
Thanks. I have an old cast iron crock that has been used for a door stop for years. The pigs even played with it some.
Wasn't sure how to deal with the horrid mess inside it.
Next fire, I will resurrect it!
It is really heavy but it should be great for doing baked beans and such.
May have to do the kettle too.... 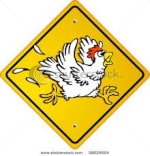 Posts : 382
Join date : 2011-03-15
Location : Cochrane, Alberta
does this work with rusted ones??? the resurrecting of the pan I mean... I have some, they got "wrecked" in my opinion, but I didnt have the heart to toss them! I would just love love to get them cleaned up and working in my kitchen where they belong!


have you ever seasoned them on a bbq?? would that work too?? its getting dang hot here and I really dont feel like heating up the house for the day with the oven (although if my canning stove gets installed outside on the deck soon, I could easily do it out there!)

I'm not sure about the rust, but I would try wiping it lightly with oil or lard, let it permeate, then strip it in the oven. it just might work. rust is usually only on the surface. Worst case scenario, take a wire brush to it. You can't hurt it.
The goal is to get it down to bare metal anyway. You just don't want it pitted from the rust. 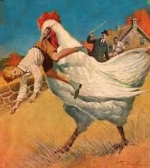 Posts : 559
Join date : 2013-02-04
Location : ARMSTRONG BC
I always use olive oil to season my cast iron pans...but i use a very warm oven ~200 and leave it in overight. i turn the pan often, to get the oil up on the sides. It works great.
I did not know about the self clean oven trick, and that is a great thing to know..thank you...it is brilliant.
Once you use a cast iron pan, you never wash it with soap, just rinse under hot water.
if there is a mess from something in the pan, you just put some water in the pan and put it on a burner on high..the mess will just lift off

Posts : 5766
Join date : 2011-03-14
Location : Carnwood, AB
I would beware if you have a glass topped stove. Sometimes high heat will warp the cast iron. If the bottom becomes warped and does not make proper contact with the glass top you can take your pan to someone who works on engines. They have a big flat granite block that can be used to grind metal engine parts flat. You may be able to sweet talk them into flattening your cast.

Hillbilly wrote:Have you had that happen Sue? Just curious. It must be some cheap cast iron if so, because in an a self clean oven, the temps rise above 1000 degrees.

I have had cheap cast warp on the stovetop! At least I think that is where it happened. Maybe it was warped before I even got it.

The best cast is ancient and found in thrift stores. Macklemore is my hero!

Posts : 554
Join date : 2011-12-14
Location : Outskirts of Olds Alberta.
I have 3 Old Cast Iron frying pans, non of them really have rust on them, but was going to clen them pretty much as described above.....But....We had a winter mouse invasion and they went in the drawer in the bottom of my stove, YUCK!

Now I don't know HOW to clean them, or if they are even usable anymore? They have MOUSE PEE & POO in them...

Can these ever be used again? Or are they just wall hangers now????

Can someone please come on and answer this Please.